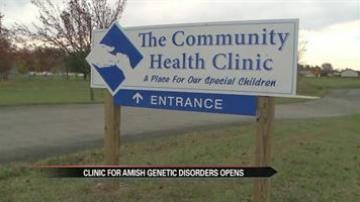 LAGRANGE COUNTY, Ind. -- Over the years, several rural communities in northern Indiana have suffered from high rates of genetic disorders. Left untreated, they can cause all sorts of health complications, even death.

In Topeka, in LaGrange County, a new clinic just opened up to meet the community's growing need.

Health experts say it has a lot to do with the area's genetic makeup.

Amish and Mennonite people tend to marry from within the same community, so there's a lack of genetic diversity which leads to a higher rate of some genetic disorders

In northern Indiana, those disorders are rising at an alarming rate, especially in Amish country.

The Amish population is five to ten times more likely to be born with genetic disorders.

Part of it is genetics. But there are other issues too.

A lack of transportation means lab tests and regular check-ups aren't always an option, especially when most of the clinics that deal with genetic abnormalities are out-of-state.

"Slipping through the cracks, either because of not having a phone or not having the funds," said Angi Scheid, a pediatric nurse practitioner.

Scheid and others at the Community Health Clinic are changing that.

After five years of planning, their facility finally opened up.

They're helping more than 60 patients - many of them children.

Depending on the genetic disorder, some ingredients have to be managed very carefully.

For some, even the sugars in a soda could mean a hospital visit.

"When it comes to metabolic disorders, the diet is of paramount importance. Can't be under emphasized," said Sharlene Herington, a Dietitian Nutritionist.

The biggest challenge the clinic has is funding.

Tests are expensive and the Amish don't have health insurance

They rely on donations and grants to get by.