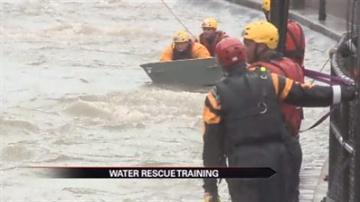 "If somebody's stuck somewhere, you have to go get them, whether it's underwater or the side of a building, in a car, or under a train,” said Captain Liam Flaherty of the NYC Fire Department.

In the midst hurricane sandy, New York City firefighters had to dive into flooded basements to save lives. That's when they realized they need swift water training.

"New York is surrounded by water, but we're not used to dealing with water that's moving, like with a heavy current,” said Flaherty. "Our brothers and sisters here in Indiana really helped us out a lot."

While Flaherty and his team were training on the east bank Tuesday, a young girl fell in the water and was swept away.

"We heard the dispatch and within 15 seconds that the dispatch came out, we had a boat where that little girl was,” said Captain Bob Means of the South Bend Fire Department.

"We were fortunate that we could get her out of the water,” said Means.

The New Yorkers say they feel right at home in Michiana.

The New York firemen drove to Chicago Friday to enjoy the Windy City before flying back home.