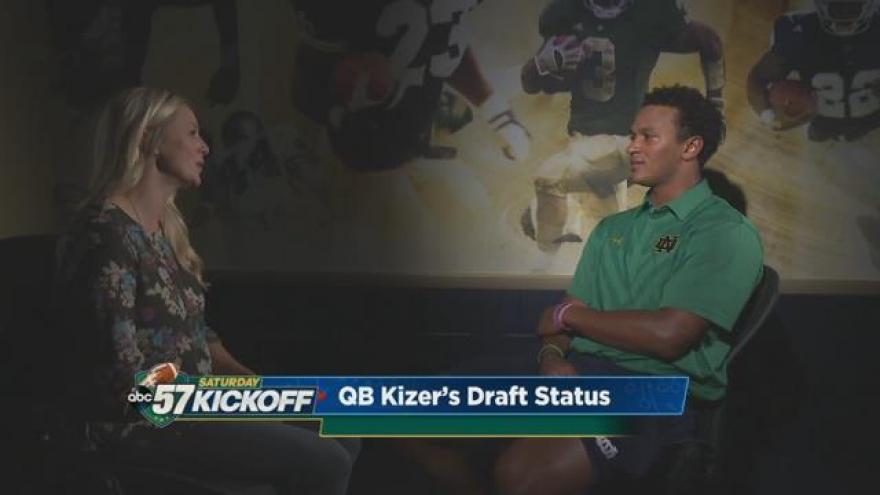 There's no doubt Notre Dame quarterback DeShone Kizer has been the star of this year's team. He is one of the best quarterbacks in college football and considered by NFL draft experts to be a high first round pick.

He averages 270 yards per game, but that stat took a hit after last week's 'hurricane bowl' at North Carolina State.

ESPN's Todd McShay has him in the top 32, while Mel Kiper has Kizer going 18th overall

Some outlets even have him as high as the number one overall selection by the Cleveland Browns this year.

Kizer spoke exclusively with ABC57 about how he's handling all the noise surrounding his draft status and whether he will be the quarterback next year at Notre Dame.

"Obviously, the chatter happens and there's people who send you the texts and the pictures of what's going on out there. But there's just so much going on within this system, within this program that I need to give my full attention to that it allows me to kind of block it out. I have midterms this week, I have games to go win, I have to make sure my social life is kept in my small circle in order to focus up on how I'm going to take what I have now and be the best that I'm going to be," Kizer said.

Will he be back next year?

"We'll evaluate it at the end of the season and figure out what's the best for us. Obviously, coming from a middle-class family back home if there is a potential for me to change my family's life then maybe I have to take it. But as of right now, I'm putting into right now is winning games here. I can tell you this, if we go out there and we lose every game from here on out there won't be an opportunity to play in the NFL. And right now, I'm just trying to focus up on how we can beat Stanford and how we can move forward in the season and how we can turn it around," Kizer said.