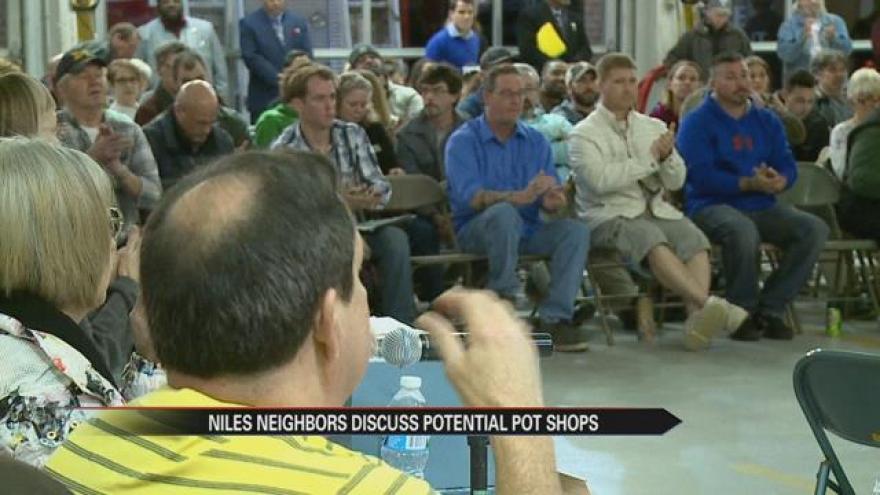 The City Council held a forum on Thursday to discuss the proposed operation of medical marijuana facilities in the city of Niles.

Around two hundred people showed up to tackle the controversial issue.

The three new acts in the state’s Medical Marijuana Program have no effect unless the city approves them.

There is also flexibility for the council to choose what types of facilities will be allowed and how many of each.

While only a handful told the council they were opposed, a few dozen voiced their full support.

Many medical marijuana users described how beneficial it has been for them.

“I feel better now than I ever have. The cannabis oil takes all my pain away. All of it,” said Groves.

Round trip, it’s a 300 mile drive from Niles to Ann Arbor to get it.

“For me it has been a lifesaver. I am able to get out of bed, to wash dishes, to just do the mere things I used to take for granted,” said Johnson.

Matt Johnson, owner of Lush Lighting, moved from Indiana to Michigan in 2011 so he could run his business making LED grow lights.

“I think it’s important for the community to see not only the holistic benefits but also the economic benefits,” said Matt.

Many others also advocated for the potential economic boost the facilities could have on the city.

“This is a momentum that’s growing nationwide and I think the ball is rolling and I think it’s important for the city of Niles to get on the right side of that ball,” said former Mayor Mike McCauslin.

McCauslin commended Mayor Nick Shelton and the council for including the community in the discussion.

“They're the ones to make the choices, they’re the ones to give us the directions and then when we get feedback we can better serve them,” said council member Georgia Boggs.

“The council will continue to discuss options, hopefully we hear from more of the community that was a very small sample. We certainly want to hear what more people want to say. At the end of the day we want to do what’s best for Niles residents,” said Shelton.

There is no time frame for when the decision will be made.