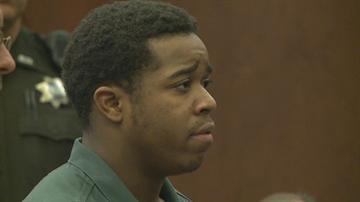 NILES, Mich. – An emotional Martell Miller, one of five Niles teens charged with blackmailing a 17-year-old girl into sex by threatening to post a sex tape on Facebook, returned to court on Wednesday.  Miller is the last of the defendants in the case yet to be found guilty.  Leon Murphy, Parnell Martin and Trey Nichols have all plead guilty.  Martise Washington was found guilty on all seven charges against him at trial.

"There is a constitutional right to a speedy trial, but I don't see in any way that we've, in this case, gone anywhere near those limits," Sible explained to Judge Schofield.

Judge Schofield agreed and ruled that Miller’s case not be thrown out.  The issue wasn’t the end of disagreement between Miller and his attorney.  Both the defense and prosecution asked that Miller’s trial be pushed back two-weeks to December 13th.

"I've explained that to Mr. Miller, certainly anything that would be helpful in his defense is worth waiting two-weeks for," Sible explained.

When asked what he thought of rescheduling the trial, Miller broke down in tears and he was lead from the courtroom to think about the issue.  When he returned, he stepped up to the podium and demanded his trial not be moved back.

"No, no, I do not want to adjourn this for two weeks, this has been going on for a long time," Miller said in court.

Miller proclaimed his innocence, despite other defendant’s guilty pleas.

“Mr. Miller does have a point, this matter has been going on for several months and the people, Mr. Miller, the court, the community and his family deserve this matter to be resolved in a prompt, full and fair fashion,” Judge Schofield explained.

However, Miller’s trial date was pushed back.  But, Judge Schofield made it clear to attorneys on both sides that it was unlikely that he’d rule to push the trial back any further.  Miller’s case is scheduled to go to trial on December 13.