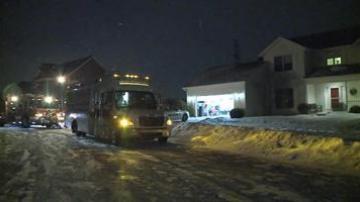 GRANGER, Ind. -- A massive manhunt in Granger ended after a man was found dead Tuesday night.

Police believe Turns was the man involved in an arson and theft at the Niles Walmart Sunday.

They say they received multiple tips, many of them leading to Turns.

A detective from the department followed up on the tips by going to the suspect's father's home on Sharpstone Court in Granger.

What started out as a simple questioning turned into a massive manhunt after the suspect decided to run.

The chase involved authorities from both Berrien and St. Joseph County.

Police say the man was armed and dangerous.

They blocked off a large part of the Bridlewood neighborhood, just behind the Penn-Harris Library, and instructed everyone they saw to go inside.

Turns allegedly tried to get into a number of homes in the area, and even attempted to carjack a woman at gunpoint, police said.

After one final attempt to get inside of a home owned by a family with 3 small children on the 51000 block of New Colony Drive in Bridlewood, Turns shot himself, police said.

"Only by the grace of God," said Commander Tim Corbett with St. Joseph County Metro Homicide. "This guy was armed and if he had got inside of this house we would've had a S.W.A.T. situation and hostages."

The case is currently being handled by the St. Joseph County Metro Homicide Unit.