No injuries in train vs. car crash Friday morning 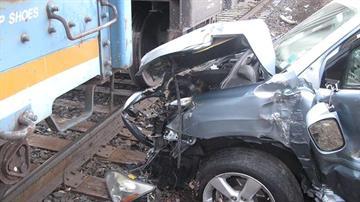 WARSAW, Ind. — Several railroad crossings in Warsaw were blocked after a car drove into the path of a train Friday morning.

According to Warsaw Police, the crash occurred at the Market Street crossing around 8:30 a.m.

Ppolice said the car was travelling westbound when it crossed over the tracks and in to the path of the northbound train.

The car was pushed to Main Street before becoming dislodged.

The crossing has lights but does not have gates.

Police said that the driver was not injured.

Robert Yerkes lives near the accident site. He says he was sleeping when the crash woke him up.

He says he was sleeping when the crash woke him up.

"I think there should be crossing guards because it would be a lot safer, so nobody gets hurt," said Yerkes.

Investigators checked the train's horn and the warning lights on the road and both were functioning correctly. Norfolk Southern workers were out at the site testing the rails and equipment for several hours after the accident.

We reached out to Norfolk Southern to find out why only one intersection has crossing arms, but our calls were not returned.