No money for youth baseball uniforms in Benton Harbor 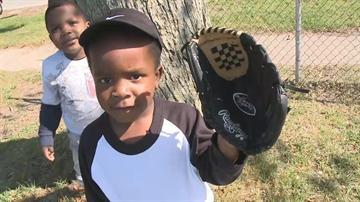 BENTON HARBOR, Mich. - The Summer Youth Baseball Program is up and running right now in Benton Harbor but there’s a problem this summer.

Funding that supported the program for several years dried up from the city and non profits. For the first time kids are playing without uniforms and right now there is hardly enough money to pay for referees.

“I got my baseball glove and my cleats,” said 12-year-old JonQuez Curtis, pulling his only equipment out of his backpack Monday.

Curtis’ parents bought the baseball gear but he’s playing on the under-12 travel team with just the shirt on his back.

“The funding we have right now has come from registration fees which cover maybe 1/16th of what we actually need,” said Danny Jennings who runs the program.

Jennings said because of the hole in funding he’s forced to ask nearly 250 Benton Harbor kids to play in games without uniforms and with outdated equipment. “Grab some tees that are the same color as the uniforms you’re going to have,” he said. “Find a hat and let’s try to play some ball.”

The season official opened this past Saturday at Union Park in Benton Harbor.

According to Benton Harbor Mayor Pro-tem Sharon Henderson, since late February the commission has been debating how to spend a $200,000 donation given to the city by Whirlpool Corporation.

“They’re at a stalemate which means we suffer,” said Jennings.

Jennings said basketball is the most popular but summer baseball in Benton Harbor serves more children than any other organized sport in the city.

Nothing is keeping JonQuis off the field but having a uniform sure would be nice. “So I can represent my team.”

The city’s Emergency Manager, Mayor and Mayor Pro-tem all need to sign off on a recipient before funds from the donation are allocated.