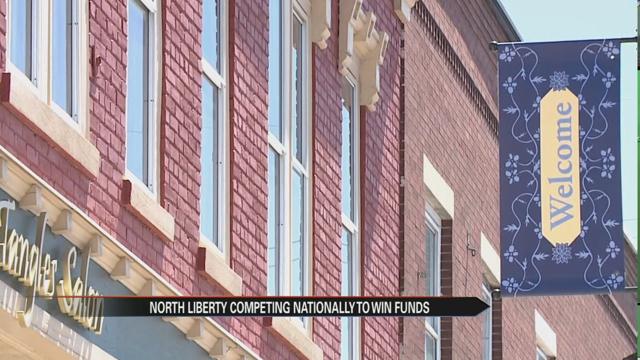 The town of North Liberty is a finalist in Indiana's Stellar Communities Program.

“It's a huge, huge thing for the communities and it's a brilliant idea,” said Sue Solmos, President of the North Liberty Main Street Merchants Association.

The small, thriving town of North Liberty, Indiana is hoping to make some very big improvements.

The program seeks to make Indiana communities stronger and more sustainable through projects, partnerships, and investment.

“If we could win, it'd be like winning the lottery for this small community. A lot of neat plans,” Over the Top Café Co-owner Vivian Bolen explained.

Plans, such as creating a walking and biking trail from North Liberty businesses to Potato Creek State Park.

“The number one thing people want to see is a trail to that park,” Solmos added.

North Liberty also wants to create a splash pad, for kids to enjoy during the summer months.

They also want to add more housing to the Shamrock Estates, a senior housing facility.

Making businesses more attractive is also a top priority with the creation of a $50,000 facade grant for downtown.

All projects the town has never had the resources to fund.

“We got less than 2,000 people. It's hard to come up with money to do improvements and stuff so it would be a major event if we were actually able to win,” Bolen said.

“We think North Liberty is just the perfect place to live and grow and we're very excited,” added Solmos.

The town is competing against one other town called Dunkirk. It is located near the Ohio border.

The winner of the State Stellar Competition will be announced at the Indiana State Fair this August.
Share this article: