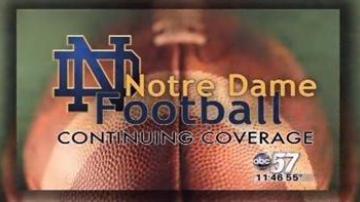 PALO ALTO, Calif. –  The Fighting Irish were no match for Stanford, as they took a tough loss (28-14) on the road for their final home game of the season Saturday night.

No. 24 Norte Dame struggled against No. 5 Stanford from the beginning. The Irish made mistake after mistake, unable to get any momentum until late in the second half when Brian Kelly made a quarterback change.

Starting quarterbackTommy Reese was taken out of the game at the end of the half, replaced by Andrew Hendrix.

Halfway through the third quarter, Hendrix put Notre Dame's first points on the board. Hendrix threw a touchdown pass to Michael Floyd, cutting Standford's lead to 21-7.

With less than a minute left in the game Notre Dame scored its second touchdown of the night, but a strong second half was not going to be enough in the end.

Despite his best efforts, Hendix was not able to steal the show from Stanford's star quarterback Andrew Luck. Luck lead the Cardinal to a victory over the Irish while set a school record for the most career touchdown passes, surpassing his own single-season record.

With less than six minutes left in the game, Luck threw a 55-yard touchdown pass to Coby Fleener putting the game out of reach for the Fighting Irish, taking the lead 28-7.