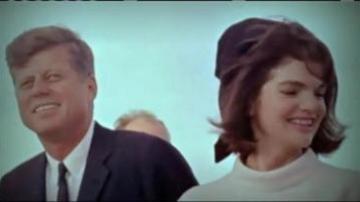 NOTRE DAME, Ind. -- Before Saturday night's Notre Dame game against Brigham Young University, a flag was presented to G. Robert Blakey, one of the nation's foremost authorities on the assassination.

Blakey was the chief legal counsel and staff director for the U.S. House Select Committee on Assassinations and helped draft the President John F. Kennedy Assassination Records Collection Act of 1992.

As the Irish commemorate the anniversary of the assassination, fans looked back on the memories they have from November 22, 1963.

Notre Dame fan, Tom Menn, found out about Kennedy's assassination by a cancellation sign at a local restaurant on his way to the game. He was 37 when Kennedy was killed.

“The sign on the door said the Notre Dame – Iowa game has been canceled," says Menn.  "So we had nothing to do but turn around and go home.”

“And standing beside his grave that day, I just couldn't believe that if anyone would have told me the week before that I would be standing next to John Kennedy’s grave I would have told them that they were crazy,” says Menn.

An Irish fan for over sixty years, Menn says that he has never missed on Notre Dame Football Game.

Except for the canceled Notre Dame - Iowa game in honor of JFK.

President Kennedy received Notre Dame's highest honor, the Laetare Medal, in a White House ceremony two years to the day before his assassination.  He received an honorary degree from the university in 1950.