Notre Dame heads into NCAA tourney on a high note 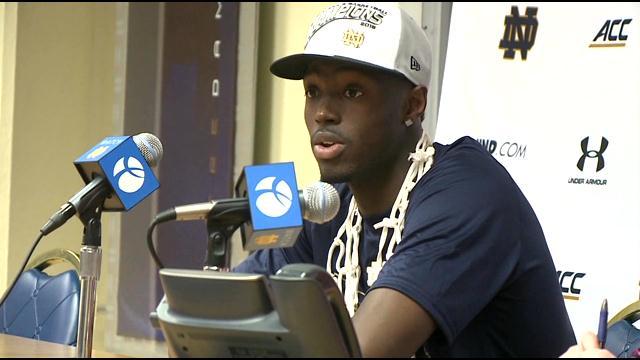 The brackets are set for the 2015 NCAA men's basketball tournament. There are five Indiana teams in the Midwest Region, including Notre Dame.

Notre Dame will take on Northeastern in the first round of the NCAA tournament.

They will be taking off to Pittsburgh for the game on Thursday, but for now they are still enjoying their first ACC Championship title in history.

Coach Mike Brey said these guys need rest, and it is rest that is much deserved.

He said they will rest for one more day and be back to work on Tuesday.

The Notre Dame Fighting Irish have only been in the ACC for two years.

"We will celebrate for one more day," said Brey.

Then it is back to business, because the team says they are not quite done yet.

The Irish say they know they have not had much success in March before, but winning that ACC title proved they have a new attitude.

“Just to be able to go to the Sweet Sixteen and the Elite Eight and to get a chance to play against Kentucky and do something special there would mean a lot,” said Grant.

Coach Brey said he is telling the guys to focus on one weekend at a time.

"Don't even look at the rest of the bracket. Let's look at the Pittsburgh as a tournament. Win that and then come home and regroup," said Brey.

Even though they are just 24 hours in on a high; they have a new challenge in Northeastern.

It is the first step to getting that coveted championship to continue making Irish history.

Coach Brey added that this is the most confident he has ever felt about a team heading into the NCAA Tournament.