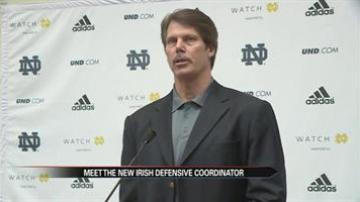 NOTRE DAME, Ind. -- The Fighting Irish football team is welcoming a new defensive coordinator to the program. Head Coach Brian Kelly made the announcement Tuesday that the University of Notre Dame has hired Brian VanGorder to replace Bob Diaco.

VanGorder was head coach at Wayne State and Georgia Southern for a total of five years. Plus he has five years of experience in the SEC and seven seasons coaching defense in the NFL.

VanGorder was Coach Kelly's defensive coordinator in the early 90s at Grand Valley State in Michigan.

"The one thing I really look forward to are the already established standards and expectations here with the Notre Dame football program and certainly the enthusiasm that he has brought to Notre Dame and that I'm going to be a part of," said VanGorder.

The Jackson, Michigan native worked with the Atlanta Falcons for five years, along with stints with the Jacksonville Jaguars, Western Illinois, Central Michigan and the University of Central Florida.

"Feeding them the information, giving them all of the things that physically are going to help them become the best that they can be, there's even more room for that and it's even more enjoyable for someone with my personality," said VanGorder.

Coach Kelly says VanGorder is a first-rate teacher, a quality that was important for the Irish in the hiring process.

"To bring together our defensive players you need to have the ability to communicate and to teach and Brian is one of the best teachers if not the very best teacher that I've been around," said Coach Kelly.

VanGorder's coaching history according to a press release from Notre Dame: