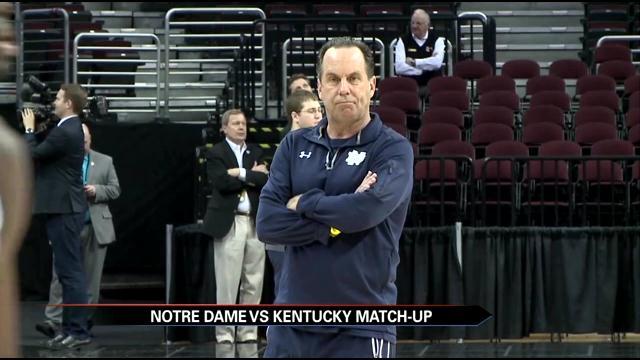 The Fighting Irish Men's Basketball team has the chance to make history Saturday night against the Number One ranked Kentucky Wildcats.

The Wildcats boast the best defense in the nation, with their size limiting what opposing teams can do offensively.

This makes Saturday night's game one of the toughest tests yet for the Irish.

But what Notre Dame lacks in size, they make up for in speed.

"It's not just one or two guys that are scoring the bulk of the points. At any time it can be a different 20-point scorer. Last game it was Demetrius, the game before that it was Steve. We have a lot of weapons and you're going to have to guard every guy on the floor at all times," said Jerian Grant, a Notre Dame guard.

The Wildcats will be up against a fast Irish offense with some of the most powerful shooters in the nation.

To combat that, Kentucky will look to run shooters like Steve Vasturia and Jerian Grant off the three point line, forcing them to shoot for two. That is something that won't be easy for Notre Dame against guys like Trey Lyles and Karl Anthony-Towns who stand close to seven feet tall.

"We're just going to have to lock down defensively and play up to competition and just raise our game," said Trey Lyles, a Kentucky forward.

Notre Dame Head Coach Mike Brey says it all goes back to his team's preparation, and he says they're ready for Kentucky.

"We played in the best conference in America, and going through the teams we had to go through in ACC play, I think this has us very prepared to play against a great team like Kentucky," said Brey.

Kentucky has a perfect record of 37-0 this season, with their last loss in the 2014 National Title game against UConn.

The winner of Saturday night's game will advance to the Final Four in Indianapolis next week.