Notre Dame officials meet with Pope Francis at the Vatican 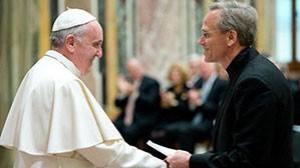 VATICAN CITY -- University of Notre Dame's president, board of trustees and members of the university's leadership team met with Pope Francis in Vatican City Thursday.

The meeting with Pope Francis lasted for an hour. During the meeting, Father Jenkins told Pope Francis that he hoped a new Notre Dame City in Rome would expand the university's service to the Holy See.

The visit to the Vatican ended a week of meetings in Rome by the trustees that included Masses in ancient churches, visits to historic sites in Rome, a tour of the Sistine Chapel and a visit with the US Ambassador to Italy, according to the university.

Over 2,100 Indians want to be evacuated from the US. But until India's lockdown lifts, they're stranded

Fauci says states should have 'wiggle room' on reopening but cautions: 'Don't wiggle too much'