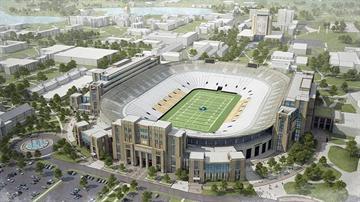 SOUTH BEND, Ind. -- Notre Dame has a plan that could upset some university purists. It's considering a major change that would turn the football stadium into the center of campus.

Nothing is set in stone, but in the next six to nine months the university will be weighing its options on what it should add.

An artist's rendering released by the university Thursday shows what the stadium would look like if some of the additions were made.

The ideas being tossed around include a bigger, better student recreation center, along with some additional classrooms and maybe a restaurant.

Some people say the stadium is already the center of the campus so this is just a way to expand on that tradition.

"Some folks started talking about it, and came up with the idea, 'Hey, what can we do to build onto the stadium,’ to use it more efficiently and to meet our needs,” said Dennis Brown, University of Notre Dame Spokesman.

The university doesn't have an estimate on how much it would cost, but it would almost certainly be a multi-million dollar project.

A completion date is also hard to give, but a spokesperson says realistically, it's still three to five years out.