Notre Dame ushers say "I do" at end of Irish tunnel 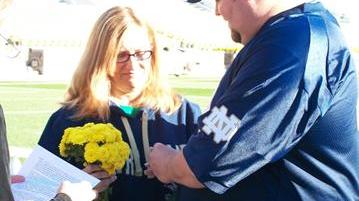 NOTRE DAME, Ind. – Saturday was a night of firsts at Notre Dame Stadium. It was the first night game in 21 years. The first night the Fighting Irish wore their new gold helmets, and for two game day ushers, a time to celebrate their first wedding anniversary.

This wasn’t you’re average wedding, but instead a spur of the moment opportunity for a couple from Nebraska to tie the knot at the end of the Irish tunnel. Thanks to some help from ushers at Notre Dame Stadium.

Scott Babcock is a lifelong Notre Dame fan. “My grandma got me turned into a Notre Dame fan when I was about three or four years old,” said Scott.

Little did he know he’d get the rare chance to say ‘I do’ at next to his favorite team’s field.
“We couldn’t have planned anything near as special as it was,” said Scott.
Scott and his bride-to-be, Kyla, got game tickets at the last moment last October and that’s when it hit him. “I said wouldn’t it be neat to get married in the stadium?” said Scott.
The next thing they knew, they were driving the eight and half hour trip from Omaha, Nebraska, to Notre Dame, Indiana.
“We got tickets on Tuesday maybe we left town on Thursday night,” said Kyla.
The plan was to get a marriage license in the morning and then get married in or as close to the stadium as possible.
On Friday morning the couple went to the county clerk‘s office to see what they need to get hitched. Sixty dollars and proof of their drivers’ licenses later they were getting close to their Irish ‘I do's’.
The clerk asked who was going to be marrying Scott and Kyla, and they said they didn’t know.
The clerk offered to meet them on campus after she got off work, and the couple took her up on it.
With things starting to fall into place, Friday afternoon they made their way onto Notre Dame’s campus.
“I asked one of the guys at the gate, I said, is there any way we can get inside for ten minutes? We got somebody coming up to marry us. He said, yeah, go around to the north end. The tunnel is open,” said Scott.
Just before Scott and Kyla walked into the tunnel, another couple had just been engaged at the stadium. For usher Jen James, it was the first time she had seen anyone proposed to at the stadium.
The group of ushers remembers Jen just being giddy about it, and when they heard what Scott and Kyla wanted to do, usher Phil LaBar said he couldn’t wait to tell his fellow usher.
“Tapped her on her shoulder and said hey I got one better than you. You got a couple that got proposed to. I got a couple getting married,” said Phil.
The ushers knew the tunnel was closing soon at 5 p.m., so they worked quickly to try and help Scott and Kyla get their dream wedding.
“They didn’t ask me to break the rules. They didn’t ask me to keep the tunnel open longer. They didn’t ask for anything, and it was great that I could do anything,” said Jen.
After getting the go ahead, it was time to get the officiator to the site.
“We called her and said you got to hurry. You’re off at 4:30, they close at 5. You got to hurry,” said Kyla.
Once she arrived, the wedding party was formed. “I offered to be Kyla’s witness and Paul offered to be his,” said Jen.
“Never in hundred years did I ever think I would be part of a wedding at Notre Dame Stadium. Ever,” said Tunnel Supervisor Paul Miller and Phil took over camera duties.
Once Kyla had a fresh picked bouquet of mums from the sideline, the ceremony was underway.
After Scott kissed his bride, the group ended the ceremony with a little Irish tradition.
“At the end everybody broke into the Notre Dame Victory March which was even better,” said Scott.
For an Irish fanatic like Scott, he couldn’t believe what had just happened. “It didn’t sink in for a day or two that we actually got it done and what happened,” said Scott.
But thanks to some help from the usher crew, the Notre Dame Wedding was all in a day’s work, which is what this group said, makes Notre Dame a special place.
“Every weekend there’s 80,000 people coming to this stadium and its thousands of dreams come true,” said Phil.
Now Mr. and Mrs. Babcock have a new role at the stadium, that’s not bride and groom. They’ve joined their bridal party as ushers in Sections 11 and 12 during home games.
“I’m happy to see them come back as ushers and be part of the whole experience on game day,” said Paul.
For the Babcock’s, it’s now about passing the Irish experience on.
“We have an extra burden because our experience was so wonderful that we want to try and if make everyone else’s experience half as good as ours we’ve done a good job,” said Scott.
And now every time they're back at Notre Dame Stadium, they get to share of new tradition of remembering their 'I do's'.
Share this article: