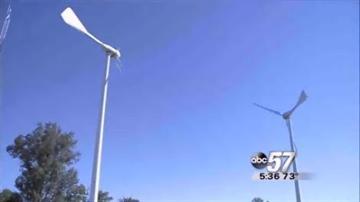 SOUTH BEND, Ind. -- If you've driven down the "new" Douglas Road in South Bend near the Notre Dame campus, you may have noticed two wind turbines. The university is working to establish a premier wind energy research program.

The first wind turbine started operating about a year ago. The second has been working for only about six weeks.

High in the sky, the University of Notre Dame's e-wind program is keeping a close eye on the power two wind turbines are cranking out.

"The research is aimed at improving the performance of wind turbines. Generally speaking, wind turbines generate only about 35 percent of the available energy in the wind," said Thomas Corke, Director of Institute for Flow Physics and Control.

Corke says they're making those improvements by active aerodynamic control. It is done by modifying the rotor on a turbine.

"We're making the air that goes around a wind turbine rotor think that the rotor shape is different than it is. We call that virtual shaping. We don't actually change physically the shape but the air thinks the shape has changed," said Corke.

Here's how the research site works.

Then, the year old west turbine stays constant at "white field" so they can monitor the power it produces.

Researchers compare that data to the east turbine, which is manipulated with new technology.

But making a change up in the sky isn't easy.

"We have to go up there to make those changes. We do that early in the morning generally when the wind speeds are low," said Corke.

The wind turbines are 60 feet tall.

While other universities have access to wind farms, Corke says Notre Dame's two towers are unique-because they're small enough to work with but the findings can still be applied to others.

"They are prototypical of large wind turbines but they're small enough that we can make modifications to them and test our technology," said Corke.

The turbines are rated at 25 kilowatts at full capacity.

The power the turbines generate goes directly into Notre Dame's grid for use.