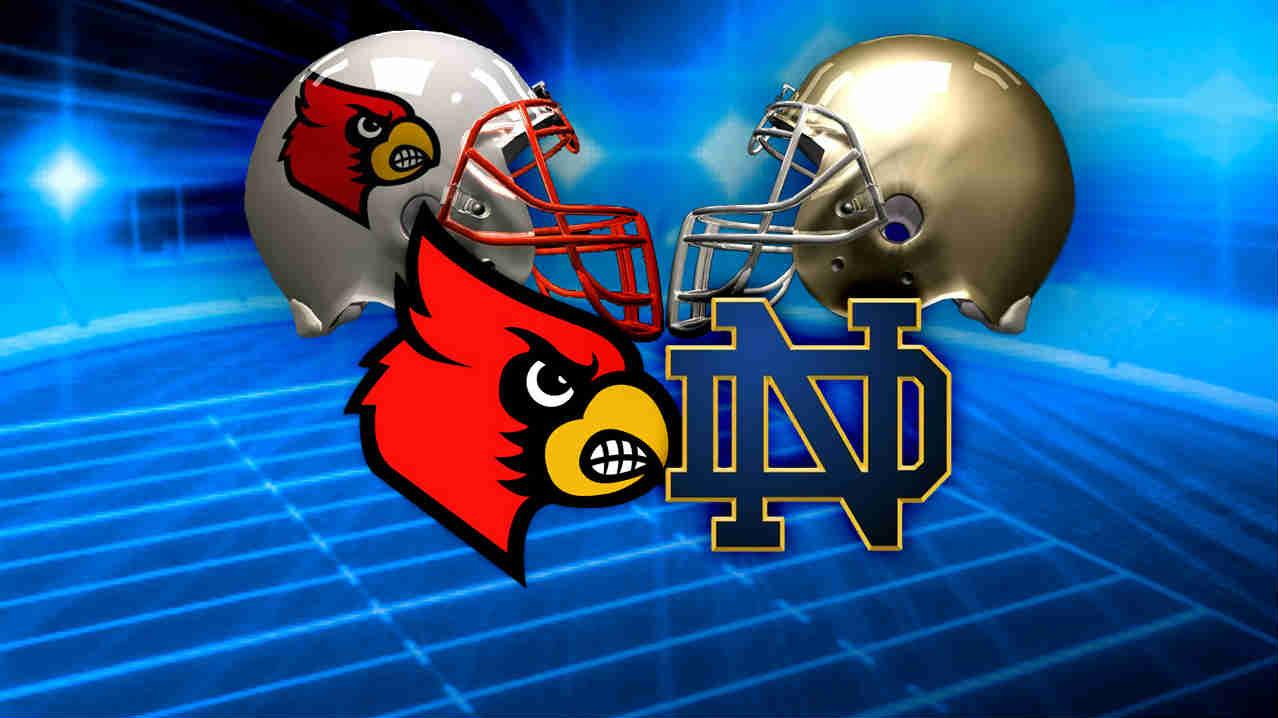 The game would be a true test for the Fighting Irish, who were coming off of  an upset loss to the Northwestern Wildcats and have been plagued by injuries and turnovers over the past several games.

Notre Dame would start the game with the first possession, and their offense started off clicking right away. However, after driving 43 yards in just five plays, the Louisville defense stopped the Irish and forced them to attempt a 28 yard field goal. Kyle Brindza's field goal attempt was good, giving the Irish the first points of the game and a 3-0 lead.

Louisville's offense then had an opportunity to take the field, and went on an impressive 10 play, 75 yard drive. The Cardinals' quarterback, Reggie Bonnafon, capped this drive off by running in the score himself from 12 yards out to give Louisville a 7-3 lead.

After forcing ND to punt, the Cardinals would go on another impressive drive, this time going almost the entire length of the field. The 93 yard drive took only eight plays and was finished off by yet another Reggie Bonnafon touchdown run, this time from eight yards out. Louisville took a very quick 14-3 lead, still in the first quarter.

The second quarter started off with the Fighting Irish kicking a field goal. Notre Dame's drive went 53 yards in only five plays, but was stopped short by a tough Cardinal defense. The 37 yard kick by Kyle Brindza was good, closing the lead down to 14-6 Louisville.

Louisville then came up with the first turnover of the game, intercepting Everett Golson's pass near the Notre Dame 10 yard line. ND's red zone defense came up huge with a stop, allowing the Cardinals only a field goal attempt. John Wallace's 26 yard kick was good, increasing the Cardinals' lead to 17-6.

On the next Irish drive, ball control was an issue again. As Golson was being sacked, he fumbled the ball. Notre Dame did recover, but only after a 32 yard loss. This led to an Irish punt.

Notre Dame's defense ended the first half strong, pulling in an interception for their first forced turnover of the game. The teams went into their locker rooms with Louisville leading Notre Dame 17-6.

The second half started on a very different note than the first, with Notre Dame's defense quickly shutting down the Cardinals' offense and forcing a punt. The Fighting Irish offense made what would be their quickest drive of the game, taking just three plays to drive 51 yards for a touchdown. The score came on a Tarean Folston six yard run, helping the Irish close in on Louisville, with the score now 17-13.

The Fighting Irish defense made a strong stand again on the very next Louisville drive, forcing them to yet another three-and-out. Greg Bryant made a huge return for the Irish, taking the punt reception 61 yards, all the way back to the LOU three yard line before finally being knocked out of bounds.

Notre Dame made the best of their field position, getting a pass to Corey Robinson for the score. The touchdown put the Irish ahead 20-17, giving them their first lead since an early 3-0 lead in the first quarter.

The Irish touchdown seemed to motivate Louisville in some way, energizing them to go on an eight play, 81 yard touchdown drive. The score came on a Reggie Bonnafon 21 yard pass to DeVante Parker, giving Louisville the lead right back, the score now 24-20.

After forcing ND to punt, the Cardinals' offense would shine again, this time taking only six plays to drive 80 yards for another touchdown. The touchdown came on a 15 yard run by Brandon Radcliff on the first play of the fourth quarter. Louisville increased their lead with this play to 31-20.

Notre Dame's offense then returned the favor with a fast, long drive of their own. The Fighting Irish drove 73 yards over seven plays and went in for the score on a tipped pass play. After the ball was tipped in the end zone amongst multiple players, Will Fuller came down with the ball, giving the Irish the touchdown. Everett Golson then ran the ball in himself for the Two-point Conversion, putting the Irish down by just three at 31-28.

Louisville answered right back, driving the field again, only to come up short in the red zone. After making it all the way to the Notre Dame six yard line, Bonnafon was sacked for a loss of 14 yards on third down, forcing the Cardinals to attempt a field goal. the 37 yard kick was no good, giving ND the ball back with over five minutes left in the game and only trailing by three points.

Notre Dame took their time on their final drive, eating up over four minutes of clock during a 12 play, 65 yard drive. After taking a sack and forcing an incomplete pass, Golson and the Irish were faced with 4th and Goal at the LOU 15 yard line. Notre Dame kicker Kyle Brindza could not put the ball through the uprights from 32 yards out, giving Louisville the ball back with just over one minute left in the game.

The Fighting Irish lost a close one, falling to the Louisville Cardinals in their first-ever meeting 31-28.

Notre Dame now falls to 7-4 on the season and will look to face the USC Trojans on Saturday November 29 for their last regular season game of the year.