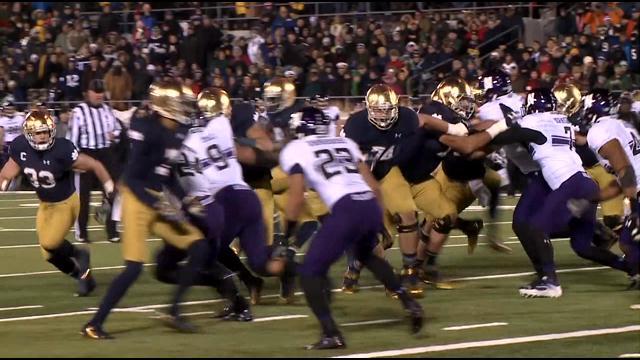 On Saturday, November 15th the Notre Dame Fighting Irish welcomed the Northwestern Wildcats into town for their first meeting since 1995.

With the Wildcats coming into this game with only three wins this season, the eighth ranked Fighting Irish were considered to be heavy favorites.

Although some believed this game would be an Irish blowout, the two teams ended up being very evenly matched up.

The Irish would start the game with the first possession, and it was a quick one. It took the Golden Domers just four plays to drive 75 yards, the largest of which was a 61 yard touchdown run by quarterback Everett Golson. That run is also the longest run of Golson's career.  Just that quickly, the Irish already had a 7-0 lead.

Northwestern also made the best of their first drive, going 74 yards in nine plays. This drive was capped off by a Matt Alviti two yard touchdown run, tying the game at 7-7.

After a failed Notre Dame drive, Northwestern was trying to put together another drive of their own when the first turnover of the game happened. ND's Austin Collinsworth scooped up a Northwestern fumble and returned it 32 yards for a touchdown. Kyle Brindza's PAT was blocked, though, and returned for a defensive two-point conversion, making the score 13-9 Irish.

The next Notre Dame drive would bring us the next score of the game. It was once again a very quick drive as ND went 64 yards in just four plays, finishing off the drive with a six yard touchdown run by Tarean Folston. This would give Notre Dame a 20-9 lead going into the second quarter.

Northwestern answered right back on their following drive, going right through the Irish defense for 75 yards in eight plays. The first play of the second quarter would be the final play of this drive, a four yard touchdown pass to Kyle Prater, cutting the Irish lead to 20-16.

Later in the second quarter is when we would see the first turnover by the Notre Dame offense.  After a long drive all the way to the Northwestern 28 yard line, Everett Golson threw an interception, picked off by Anthony Walker and returned to the Notre Dame four yard line.

It took the Wildcats just one play to take advantage of the Irish turnover. Justin Jackson scampered into the end zone from four yards out for the score, giving Northwestern their first lead of the game, 23-20.

Notre Dame answered right back with their next drive, pushing ahead for 84 yards in 11 plays. Golson threw a screen pass to Will Fuller who then ran 23 yards for the score. The touchdown gave the Fighting Irish the lead back at 27-23.

Notre Dame's defense then stepped up big, causing another Wildcat turnover, this time an interception.  Matthias Farley picked the ball off at Notre Dame's own goal line and returned it to the 39 yard line.

Notre Dame was unable to take advantage of the Wildcat turnover. The Irish offense was stopped short on their drive, forcing them to attempt a 38 yard field goal. Kyle Brindza's kick was no good, going wide left, leaving the score 27-23 at halftime.

The Wildcats offense had the first possession of the second half. After starting off with a strong drive, the Notre Dame defense finally stopped Northwestern short, forcing them to attempt a 31 yard field goal. Jake Mitchell's kick was good, narrowing the Irish lead to 27-26.

After a failed Notre Dame drive and punt, the Wildcats were given an opportunity for another scoring drive. However, this drive was also stopped short, this time because of another turnover. On just the third play of the drive running back Justin Jackson fumbled. Notre Dame's Drue Tranquill recovered the fumble and advanced it to the Northwestern 21 yard line.

Notre Dame looked as though they were going to take full advantage of a turnover and great field position, but on just the second play of their drive, Golson would have another turnover. Golson fumbled while attempting to run the ball and it was recovered by Northwestern's Anthony Walker at the seven yard line.

After forcing a three-and-out, Notre Dame's offense took the field once again. Notre Dame went on a nine play, 55 yard drive, finishing it off with a 23 yard pass to Will Fuller for an Irish touchdown. This score gave ND a 34-26 lead in the third quarter.

Northwestern's offense again pushed down the field, going 46 yards in 10 plays, before finally being stopped by the Notre Dame defense. It would be the Wildcats' kicker Jack Mitchell who put points on the board, splitting the uprights from 46 yards out, and closing in on the Notre Dame lead, now 34-29.

The following drives proved that neither team was over their turnover woes just yet. After driving 69 yards and all the way down to the Northwestern five yard line, Notre Dame's Chris Brown fumbled close to the goal line, turning the ball over to the Wildcats. The Wildcats were unable to do anything with the ND turnover though, as they would give up an interception just two plays later. The pass was picked off by ND's Cole Luke. After a Face Mask penalty on Northwestern, the Irish were set up with a first down at the NU 13 yard line.

Notre Dame would make easy work of the great field position, scoring on the third play of this drive. It was another touchdown pass to Will Fuller, this time for 11 yards, that would be Notre Dame's final scoring play of the game. The two-point conversion attempt was no good, leaving the score at 40-29 ND.

Northwestern then went on another short drive, going 32 yards in six plays, and were again forced to attempt a field goal. Jack Mitchell lined up from 43 yards out but this kick was blocked by ND's Mike McGlinchey.

After their defense forced Notre Dame to punt, Northwestern's offense came out looking much better. A strong nine play, 73 yard drive was capped off by the Wildcats' Trevor Siemian running in a score from six yards out. After a successful two-point conversion play, Notre Dame's lead stood at just three points, 40-37.

With very little time left in the game, Notre Dame just needed to move down the field and hold onto the ball. Unfortunately for the Irish, that is exactly  what they could not do. After moving 33 yards down the field in six plays, Notre Dame's Cam McDaniel added another fumble to the list of turnovers that this game had already produced. Northwestern recovered the loose ball at their own 28 yard line with little time left in the game.

Northwestern pushed 44 yards up the field before being stopped by the Fighting Irish defense and forced to attempt a game tying field goal from 45 yards out. The kick by Jack Mitchell was good, tying the game at 40-40 and sending the two teams into overtime.

Notre Dame started overtime with the first possession. After opting to throw the ball on all three downs and not moving the ball at all, ND opted to attempt a 42 yard field goal. Kyle Brindza missed his kick, setting Northwestern up for a good chance to win.

This marks Notre Dame's first loss at home and first loss to an unranked opponent this season, dropping their record to 7-3.

Notre Dame will have one final home game this season next Saturday, November 22nd as they take on Louisville.