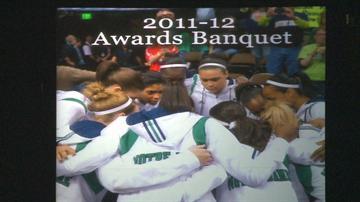 SOUTH BEND, Ind. – They may not have won the championship game, but the Notre Dame women’s basketball team had a lot to celebrate at the annual awards banquet on Tuesday.

“It’s going to be an emotional evening and I’m going to keep this smile on my face,” explained Coach Muffett McGraw.  “I think I cried enough after the final game, so it’s going to be a fun night tonight.”

McGraw will be saying goodbye to four seniors this year and said it wasn’t going to be easy losing members of the team she’d led to two championship games in as many years.

“It’s a special bond, I don’t know, just the last couple of years with this group has been really spectacular, amazing and something I’ve never really experienced as a coach,” McGraw described.  “I just feel such a bond with them.”

The banquet started with a thank you for loyal fans of the Irish.  The team signed over 1,200 autographs at a session before the festivities started.

“It’s nice,” said senior Natalie Novosel.  “Thanking them for being such avid fans and to see what we’re doing and I think it’s just a nice way to end things.”

There was a lot to celebrate at the awards banquet even without being able to carry in a championship trophy.  The team held a 35-4 record and made it to the championship game two years in a row.