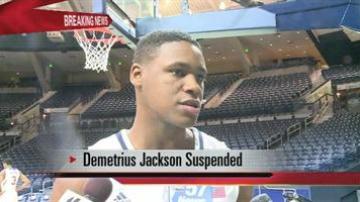 NOTRE DAME, Ind. -- Demetrius Jackson was not on the court Tuesday, and Jackson wasn't even with the team.

That didn't seem to hurt the Irish since they pulled out a win against Clemson after double overtime.

Coach Mike Brey says this just goes to show how focused this team is, even when there are so many distractions.

But with averaging over 5 points a game, Jackson is a key player, and Coach Brey wants to get him back in the game as soon as possible.

Coach Brey says he hopes to have Jackson back on the court as early as next week.