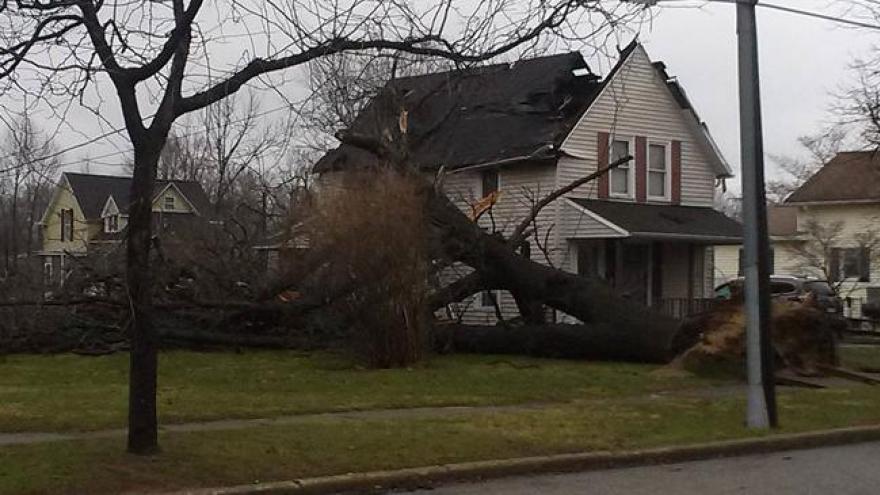 In Niles, the EF-1 tornado touched down at 8:54 p.m. and stayed on the ground for two minutes and traveled 0.6 miles. The path was 100 yards wide at its maximum. [See map below]

Tornado touched down in downtown Niles Michigan near the Eastside Elementary School. Extensive tree damage along with minor to significant structural damage to homes occurred in about a 5 block area of Niles, Michigan. Many large trees down on houses and vehicles.

The second EF-1 tornado, in Dowagiac, touched down at 8:58 p.m. and stayed on the ground for four minutes and traveled 5 miles. Its path was 100 yards wide at its maximum. [See map below]

Tornado touched down a field southwest of town and caused extensive tree damage as it tracked into the far south side of town. Here two single wide mobile homes were destroyed along with widespread tree damage and additional minor house damage before the tornado crossed through the Dowagiac Elks Golf Club and then dissipated/lifted as it crossed Dowagiac Creek.

The third tornado was also an EF-1 that struck Vandalia, Michigan. It touched down at 9:12 p.m. and was on the ground for three minutes. The tornado traveled 2.7 miles and had a path width of 150 yards at its maximum. [See map below]

Peak winds were estimated at 110 mph.

Tornado touched down south of Brownsville St west of Calvin Center Rd in a wooded area and then traveled rapidly northeast...just missing the Calvin Center SDA Church. Several large trees were uprooted here along with chain link fence pulled from the ground. Some minor damage to the was noted to the church including stripped siding and shingle loss. More extensive tree and structural damage to homes was noted just northeast of here including a roof off a single wide mobile home...garage partially deroofed and two story house twisted on its foundation along with roof damage. In addition dozens of snapped/uprooted trees. Additional tree damage occurred northeast toward Paradise Lake where several houses sustained minor roof and siding damage along with uprooted trees down on houses. The tornado continued on through a heavily wooded swamp before dissipating south of Donnell Lake.