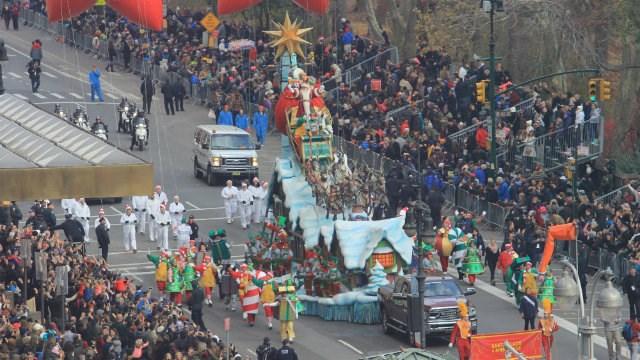 (CNN) -- The New York Police Department on Tuesday outlined increased security precautions for the Thanksgiving Day Parade, a week after an ISIS magazine said the parade would make a good target, and a day after a man was arrested in Brooklyn and accused of expressing support for an attack in Times Square.

The NYPD said for this year's parade, one new step will be to place heavy sand trucks at cross streets along the parade route to protect from the kind of deadly truck attack that took place in Nice, France, in July. The weight of the vehicles is intended to block that type of attack, where an attacker driving a truck through a crowd celebrating Bastille Day killed 86 pedestrians.

"The Nice attack was an indicator of something we had to make adjustments because of," said New York Mayor Bill de Blasio. "That's why the sand trucks are there. And you will not see vehicles crossing the route of the parade."

To prevent a truck from being rented and used as a weapon, the police department says it has visited 135 truck rental locations to encourage vigilance when it comes to renting trucks to anyone exhibiting suspicious behavior.

The ISIS magazine Rumiyah last week described how effective a vehicle attack could be in inflicting high casualties. It cited the Nice attack as a model, and encouraged militant followers to rent a heavy truck and target any large outdoor gathering, "to ensure utmost carnage up on the enemies of Allah." Under a photo of the Thanksgiving Day Parade in New York, the caption said, "An excellent target."

"Actually it's not an excellent target. It's a very well protected event," Deputy Commissioner of Intelligence and Counterterrorism John Miller said Friday.

Miller said that in years past authorities have used "blocker cars" to prevent the possibility of unauthorized vehicles entering the parade route. This year, large trucks filled with sand will be used instead of cars to block off streets intersecting the parade route.

"That gives us an advantage in several ways: A sand truck is longer than a blocker car, so we can use fewer of them and cover more ground; and secondly, you're not going to move (a truck) if you hit it with something," Miller said.

Law enforcement officials said they have no specific, credible threats to the parade. But Miller said the city was preparing for it as it has for other high-profile events: bringing in counterterrorism officers, plainclothes officers, search dogs and even radiation detectors. He said the police department saw the Rumiyah threat not only as an attackers' handbook, but also as a fear tactic.

"What you see is the psychological warfare of printing materials," Miller said. "We never accede to that. On the other hand, we have seen instances where Islamic State has put out the call, and people have risen to that call, which is why we have one of the most robust, complicated counterterrorism programs in the world."

A terrorism arrest in Brooklyn on Monday, while unrelated, highlights the concerns that a radicalized individual could target an everyday high-profile location.

Law enforcement officials said they do not believe Naji had any specific plot in the works. According to his lawyer, Susan Kellman, "He absolutely denies the allegations in the complaint."

But experts warn of an ever-present threat from lone-wolf attackers.

"It's not the one-off. It's whether you miss any of them over the course of years," said former CIA counterterrorism official Philip Mudd. "When they radicalize 100 people, 1,000 people, 5,000 people, who never even have to travel to Syria, if you misfire with those guys, you have a problem."

Americans are also being warned about terror threats abroad when traveling during the holidays. The State Department has issued a travel alert, warning Americans to exercise caution at holiday festivals, events, and outdoor markets in Europe in the coming weeks.

While there is no specific threat, the bulletin says, "extremist sympathizers or self-radicalized extremists may conduct attacks during this period with little or no warning."

The alert highlights how difficult it is to secure so many public places against a potential attack.

"People are going through areas that we just can't fully secure," said David Inserra, who studies homeland security at The Heritage Foundation. "We can't make sure that every single bus station, every single train station is fully secure."