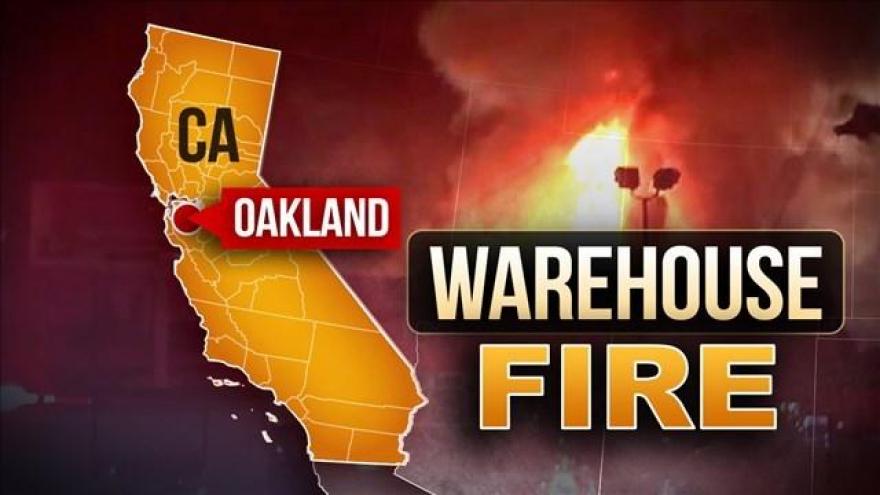 OAKLAND, California (CNN) -- A fire broke out during a party Friday night at a two-story warehouse and artists' studio in Oakland, killing at least nine people and leaving about two dozen missing, the California city's fire chief said.

Alameda County Sheriff's Sgt. Paul Graves said he fears the death toll could go much higher. "We are preparing for the worst, which would be about 40 people," he told reporters. "It may not be that many. These people could be at the hospital or with friends. That's just the worst case we are preparing for."

Initial reports indicate dozens of people -- perhaps up to 100 -- were in the building when the fire started, according to Oakland Fire Chief Teresa Deloach Reed.

Most of the dead were on the second floor, she said, adding that people would have had difficulty leaving when the fire started because the only stairway to the floor below was made out of pallets.

"There wasn't a clear entry or exit path up on the second floor. ... If (the fire) had started in that area (by the stairwell), then everyone on the second floor" would have had trouble escaping, Reed told reporters Saturday morning.

"It must have been a very fast-moving fire," she said.

"Last night's fire was an immense tragedy," she said. "Our focus right now is on the victims and their families and ensuring that we have a full accounting for everyone who was impacted by this tragedy."

According to online property records, the warehouse property owners had been notified last month of violations for hazardous trash and debris. A November complaint for illegal interior building structure was under investigation. CNN is reaching out to the property owners.

An electronic music party was happening at the building at 1305 31st Ave. on Friday night, according to a Facebook event page. People were using that page Saturday to post names of those who are believed to have attended.

Twenty-five people are unaccounted for, as reported by people who either escaped the fire or believe they knew someone who was there, Reed said.

"We don't know if any of them went someplace else, self-transported to the hospital," Reed told CNN.

Terry Lightfoot, a representative of Oakland's Highland Hospital, told CNN that the hospital received two patients and one of them has been discharged. Lightfoot did not know the condition of the patient who remained hospitalized.

Firefighters have not been able to search the entire building; crews, possibly with heavy equipment, will first have to remove debris and make sure the building is safe.

"Right now, there's limited access to the structure," Reed told CNN affiliate KRON-TV in San Francisco. "It's too unsafe. And not only that, there's a lot of heavy wood from when the roof caved in that's going to have to be removed.

"It may take some heavy equipment," she said. "It may take a whole lot of staffing. So we may have additional units out here, just using shovels and tarps to remove the debris out of the way in order to do a thorough search."

Firefighters were called to the building around 11:30 p.m. PT, the fire department said. Details about what led to the fire weren't immediately available.

"It was a very difficult firefight," Reed told CNN affiliate KGO-TV in San Francisco. "They arrived on-scene, smoke showing, heavy smoke. Once making entry into the structure, there was heavy flames and heat where they had to back out and take a defensive attack."

Reed told KGO that about 72 firefighters and 16 units fought the blaze.

The Alameda County Sheriff's Coroner's Bureau and the Arson Task Force were called to the scene. Reed said officials don't necessarily think the fire was caused by arson, but the task force will assist with the investigation.

The building "was kind of like an artist studio" that had partitions where artists worked, Reed said.

"(It) had several different partitions, where they had various artists in there," she told CNN. "Inside is just a wide assortment of just ... everything. Furniture, mannequins, statues. Just a lot of stuff inside."

She said she has heard reports that some people may have been living there, but that there were no bedrooms as such, adding it wasn't clear how many people lived there, if anyone.

Bob Mulé said he was a resident of the now-destroyed building. Standing outside the burning warehouse, he described it as "a 24-hour artists' collective" with about 18 resident artists who used the space.

He said some sort of event was underway on the second floor but was unsure of the number attending. Mulé said he was in his space downstairs, about to begin painting, when he smelled smoke.

Mulé said he could see the flames clearly and that the blaze started inside the building.

"That was another person's studio so I don't know," he said. "Maybe there was something plugged in. It could be anything, but they weren't even home. I just know it was coming from their space."

Mulé was bandaged because of burns he received trying to help another artist -- an attempt he admitted was unsuccessful.

"Another member of the collective had broken his ankle and was calling out for help," Mulé said, his voice breaking. "I was pulling him out. He's a larger gentleman, and there was a lot of stuff in the way. The flames were too much. There was too much smoke and ... I had to ... I had to let him go."