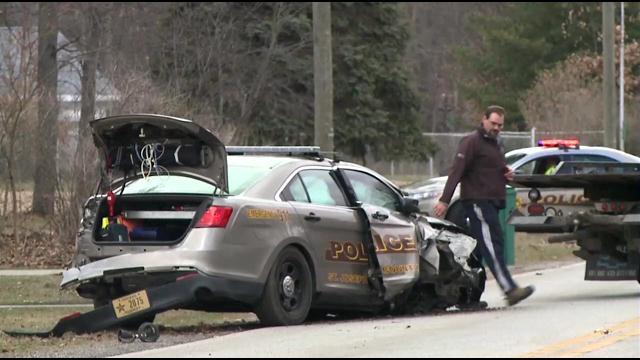 A St. Joseph County Police officer was injured in a car accident while responding to the scene of a burglary.

According to police around 1:50 p.m. Tuesday, St. Joseph County Police were called to a home in the 17000 block of Weatherstone Court for a burglary in progress.

The victim told police two men forced their way into the home.

Corporal Chris Lawson-Rulli had not started his shift yet, but was close to the scene. He notified dispatch he was responded and went north on Juniper Road.

As he approached Juniper and Glendale roads, he saw a vehicle in front of him and attempted to pass it. The driver was making a left turn, so Lawson-Rulli went further left, but lost control of his vehicle.

His patrol car went off the road and struck a utility pole.

Lawson-Rulli was taken to a local hospital, treated for minor injuries and released.

The accident caused a power outage in the neighborhood.

Several other units responded to the burglary call and searched the area, but were unable to locate the suspects.

“Our information is there were two suspects who forced entry into this house and they're both male whites. Our original information is that they were armed and we believe now what they were armed with is baseball bats. Our information suggests that after we tracked them a certain distance away with a police dog, it looks like they went to an area where they could have had a car parked,” said Bill Thompson, Assistant Chief of the St. Joseph County Police.

The homeowner was not hurt.