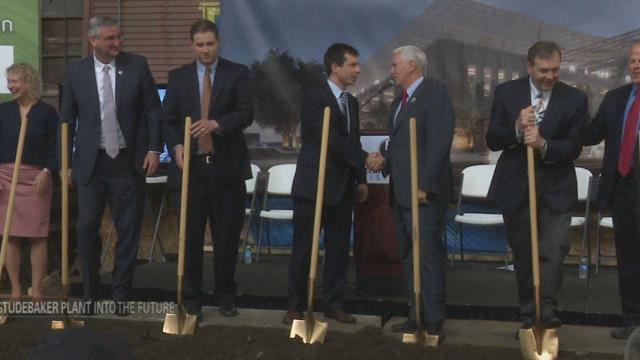 Construction is underway at the old Studebaker production plant.

Officials say the buildings could once again revitalize the area.

Thursday, Gov. Mike Pence, Mayor Buttigieg and others gathered to celebrate the groundbreaking.

“It’s exactly what South Bend’s comeback ought to look like,” Buttigieg said.

The sounds of broken ground and applause filled the once vacant Building 113.

“It holds a special place in the hearts and minds of the people of South Bend,” Willow Wetherall, of the Studebaker Redevelopment Commission said.

The 220,000 square foot space will become a technology and innovation complex.

Largely vacant since Studebaker closed in 1963, the space is undergoing a $168 million makeover.

Construction will be completed in phases over a decade.

While the work has only just begun, young entrepreneurs like Ryan Kiner of Collabart are already interested in space.

“I really think it’s inspiring for me as a young entrepreneur, and other people to know that there are people willing to back them up or to invest in the future where we can actually be a part of that future,” Kiner said.

Innovators like Kiner are the types that officials are trying to draw into the building.

It’ a Regional Cities Initiative project, the first of its kind in the city of South Bend.

“It shows what Regional Cities is about. The whole idea is quality of place, and what we’re doing here is we’re creating an amazing place,” Buttigieg said.

Above all, Buttigieg says as a resident of South Bend, seeing the building come to life again, providing jobs and hope to the community, satisfies him.

“It’s investments. It’s tax base. It’s jobs. But it’s more than that. It’s a symbol, and it’s a place where people are going to encounter each other,” Buttigieg said.