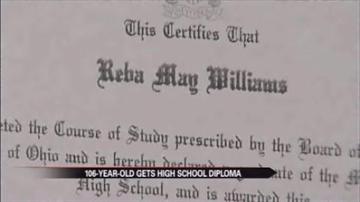 The woman completed her classes back in high school but didn't graduate because of a dispute over a book she was assigned for a book report.

In high school, she said she had already read the book and didn't want to read it again. Because of that, she never graduated.

Nearly nine decades later, she did.

She says she has no plans for college.