One killed in Edwardsburg crash 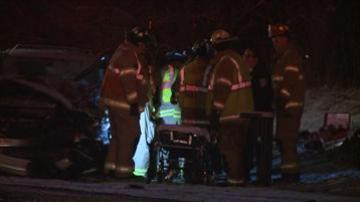 EDWARDSBURG, Mich. -- Police are investigating a fatal vehicle accident in Edwardsburg early Saturday morning. A driver of a pickup truck died after colliding with a father and his two sons on M-62.

Emergency crews say the truck was traveling south on M-62 without one of his headlights, when the accident happened.

"It's not a good situation when someone passes," Kenneth Wray, Chief of Edwardsburg Police Department, said. "Anytime."

Both cars were going the speed limit, around 40 miles per hour.

Even though both drivers weren't speeding, parts were scattered several hundred feet from the roadway.

"We're hoping that the people really slow down, and kind of make good judgment on how the road conditions are," Wray said. "This is a primary road, how about secondary roads?"

Both vehicles involved in the crash suffered major damage. Everyone had to be cut out out of the vehicles.

Police say if an accident like this can happen when conditions aren't bad outside, then they can happen anytime and encourage folks to use common sense.

"It's that time of the year still," Wray said. "You gotta watch out for the snow. It's been good for a couple of days, and speeds were back up a little bit. Tonight, the snow's back on the ground."