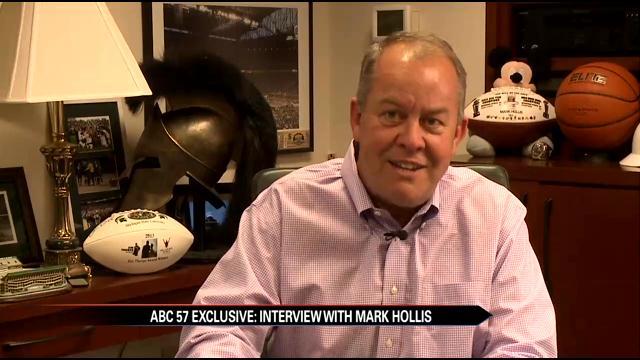 He's a man known for his innovative ideas, like having basketball games on an aircraft carrier and he says those ideas will continue.

“We have another event coming up called the Barnstorming where we're taking four quality basketball teams and playing in New York, Chicago, and LA and flying teams on the same jet together and being a part of the culture in those communities," said Hollis.

You can see the excitement in his eyes and pride in his accomplishments that grace the halls of Michigan State's Athletic Department.

He's known as an idea man in college sports - like basketball on an aircraft carrier or hockey on a football field.

One of his favorite places to go is in Michiana.

"We always love getting down to Berrien County! They kind of live like we do. We are surrounded by so many great institutions with Notre Dame, Ohio State, Michigan, Michigan State, that it gives you the opportunity to stand up and be proud of your institution," said Hollis.

Proud even though several articles this year said he was upset about a vacant student section during the Nebraska football game earlier this year.

It's a sore subject for Hollis.

Hollis says the media got it wrong.

He says his intention was to provoke a discussion about the national problem of student attendance at football games.

“What can we do in the venues to create the type of experience you are getting at home with replays and the like? So there was not an angry tone whatsoever in my Tweets! My Tweets were to address that in college football we have a national issue with the students. I don't think it's for the love of the game but for attending the game. The game has become so easy to watch on television and high def and in environments that are different than watching in the stadium," said Hollis.

Hollis also said a big part of stadium attendance is the weather.

He wouldn't reveal all his secrets but he did say they are looking into a heating system that would keep the entire student section pretty toasty during terrible weather.