Parent to step aside after two years, school board to have new president 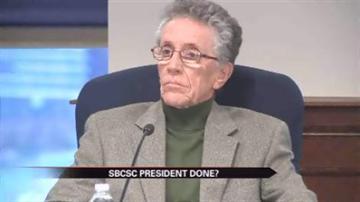 SOUTH BEND, Ind. -- Current South Bend School Board president Roger Parent says he does not want the job anymore. The decision now leaves the position wide open for other board members.

Roger Parent's time as president of the South Bend Community School Corporation's board of trustees has had no shortage of controversy. At the heart of it, the contentious relationship between Parent and fellow board member Bill Sniadecki.

This past November, Parent went against the community's wishes and censured Sniadecki, stripping him of his title as acting vice president of the board.

In a meeting with board members Thursday, Parent announced he had no desire to serve as president of the board this year.

It's a move that did not come as a surprise to the rest of the school board.

"The officers are voted on every year and normally it's one or two periods and they alternate," said board member Sniadecki.

Former board president, Dawn Jones says she can see why Parent would step away from the role simply because of  how stressful it can be.

"I definitely understand that decision because you continuously have to get eight people, because you include the superintendent, to agree or agree to disagree," said Jones.

Board members hope that this change in leadership with be a new start for the board, especially Sniadecki who hopes the new president will be a team player.

ABC 57 reached out to Roger Parent for an interview about this decision, but he was not available. As for who will replace him as head of the board? It's still unclear. No one is actively campaigning, but they will vote at on it at their next meeting on Monday evening.