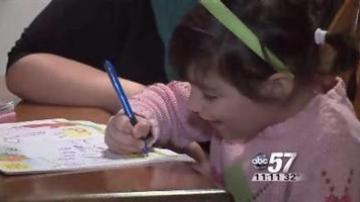 ELKHART, Ind. -- Parents are outraged after finding out their kids may have to find a new preschool if the school does not find a new building to lease by May.

Parents say they sent their kids to Little Cherubs Preschool in Elkhart because of its great reputation, but now those same Michiana parents are outraged because of a lease dispute that could force the preschool to shut down if it cannot find a new church to operate under.

Jennifer Castaneda says she has been sending her 4-year-old daughter to Little Cherubs Preschool for three years now and says they school has developed quite a reputation in its 13 years of business.

"The staff has been astronomical, compassionate, very caring, very loving, it’s a wonderful Christian environment and its one of the best educational programs we have been able to find for our daughter," says Castaneda.

Castaneda says that is why it came as a shock when she and other parents were told the church was changing hands.

Granger Community Church inherited the property and the preschool from another church over the summer.

Since then the entire church has been undergoing renovations, which is why the preschool was asked to leave their classrooms, computer lab, library and gym behind to move to the basement while the construction was being done.

"At the beginning of the year it was a little chaotic, but the staff handled it wonderfully. So, the kids relocated to the basement and we were told the school would be able to move back upstairs," Says Castaneda.

That turned out not to be the case, though.

Now parents and staff are scrambling for a solution and say they are upset at the church for being lead to believe differently. "At first we were excited about a new partnership with the church, but then we found out that would not be the case and we were devastated," says Castaneda.

ABC 57 talked to the creative director at the Granger Community Church in Elkhart, but he would only direct us to Mark Waltz, the main pastor at the church. However we were not able to get a hold of him for comment.