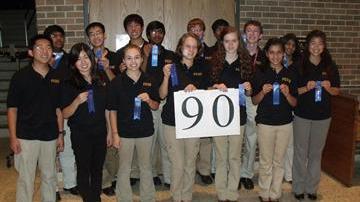 MISHAWAKA, Ind. -- The field was small but the drama was high on Thursday night in Logansport as Penn's defending state championship Spell Bowl team edged fellow state power Martinsville in a dramatic showdown at the Logansport Invitational.

The final score was Penn 90, Martinsville 87.

The perfect 90 was Penn's third of the 2011 season and 29th in history. It is estimated there have only been about 41 perfect scores ever in Indiana high school Spell Bowl and Penn has 29 of them.

Combined, the Kingsmen and Artisans have won outright or shared a combined total of 18 state titles (Penn 11 & Martinsville 7). In fact, one or both of the two schools have been state champs every year since 1999!

Penn has won or shared 11 of the last 12 state crowns.

The final standings at Logansport were:

The three opponents defeated by the Kingsmen at Logansport brought the Penn won-lost record for 2011 to 45-0.

Next up for area Spell Bowl teams is the John Glenn Regional on Oct. 17.

(Source: This is a press release courtesy of Joe DeKever)