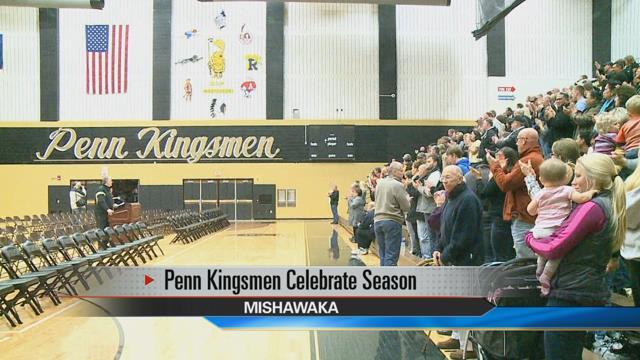 The Penn High School Kingsmen did not win the state championship Saturday night against the Center Grove Trojans, but that’s not keeping the school community from coming together to celebrate.

Dozens of families, friends and fans joined the Kingsmen in the school’s main arena for a celebration Sunday night at 6 p.m.

Despite falling to the Trojans in the 6A state championship game Saturday night 28-16,  the Kingsmen and their close-knit school community celebrated their winning record of 12 wins and two losses.

“I think it just shows how closely knit the entire community is and how much support we had,” senior quarterback Camden Bohn said.

The Penn community gathered Saturday morning outside the high school to send their team off to the game in style with a police and fire escort.

The stage was set Saturday night in Lucas Oil Stadium in Indianapolis.

Trojan running back Titus McCoy scored his first of three touchdowns early in the first quarter, forcing the Kingsmen to play catch-up all night long.

Despite a field goal in the first half and two touchdowns in the second half, the Kingsmen fell to the undefeated Trojans 28-16.

But after the game, Harvard-bound Bohn received the 2015 Phil N. Eskew award – given to a player who best demonstrates mental attitude, scholarship, leadership and athletic ability.

Though their season ended with a loss, the Kingsmen community had a number of wins to celebrate Sunday night.