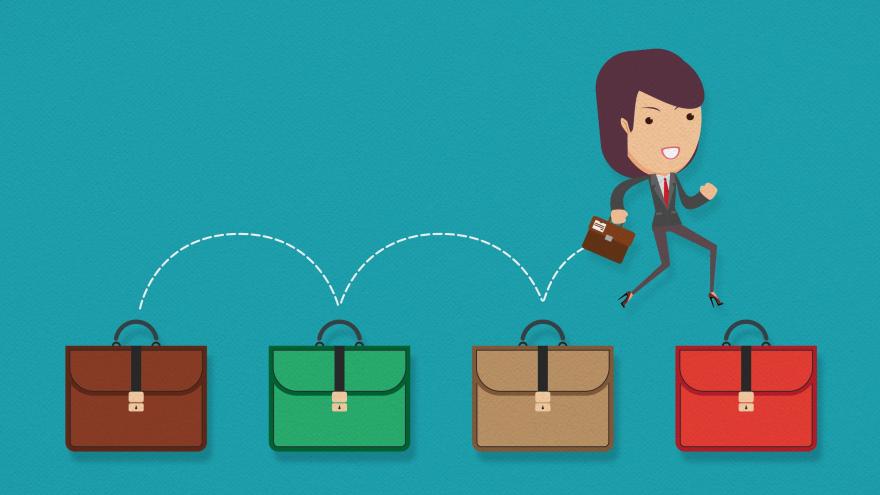 (CNN Money) -- Jumping ship at your job pays off.

Teachers, nurses, construction workers and even hotel employees who switched jobs recently saw bigger wage increases than their former colleagues who stayed put, according to new research from ADP, the payment processor.

The findings come as employers are scrambling to hold onto their workers because there's an abundance of job openings. There were 6.09 million job openings in September, according to Labor Department figures released Tuesday. That's a hair under the record high of 6.14 million in July. The government began counting job openings in 2000.

Such a high number of job openings are a mix of good and bad news. The good: Employers are hiring and America's job market is strong. Unemployment is at 4.1%, the lowest in 17 years.

The bad: Companies either can't find enough workers at a certain wage or candidates with the right job skills.

Employers often say a lack of job skills is holding back the economy, and that America as a whole needs to invest more in job training that focuses on skills that are in demand.

Another school of thought argues that companies should just pay more if they can't find anyone. In fact, despite the shortage of workers, U.S. wages overall aren't going up much. Wage growth in October was a sluggish 2.4%.

Wages are going up significantly for workers leaving their jobs though. In construction, builders who moved onto new sites saw wages go up 5.8% compared to a year ago. Construction workers who stayed at their current gig saw wages rise less: 4.9%. The same is true in education and health services. Those who left for other jobs got a pay raise around 6.2% at their new gig. Those who stayed saw wages go up 3.9%.

It makes sense that there's such a disparity in wage increases between teachers and nurses who stay versus those who move to other schools or hospitals. Of the total 6.09 million job openings in September, 1.17 million -- or about 20% -- were in education and health services.

In other words, schools and hospitals are having a hard time filling openings so some feel forced to pay more to attract new talent.

For all U.S. workers, those who switched jobs saw wages go up 4.9% on the year while workers who stayed at their jobs got a 4.3% pay bump. ADP's figures come from the third quarter -- July to September.

The trend isn't true in all industries. Manufacturing, mining and transportation firms tend to pay workers more if they stay put than if they're applying from elsewhere, according to ADP.