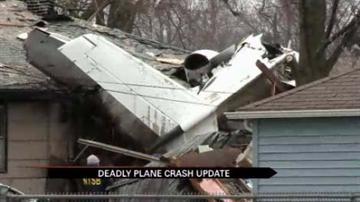 SOUTH BEND, Ind. – The identities of those involved in the fatal plane crash in South Bend Sunday afternoon have been released. Of the four people on the plane, two died and two were injured. One person on the ground was injured.

Jim Rodgers, Christopher Evans, 57-year-old Wes Cave and 60-year-old James Steven Davis were all on board.

Two people, Cave and Davis were killed. Cave owned and piloted the plane. Davis was a former University of Oklahoma quarterback.

Rodgers and Evans were injured and taken to Memorial Hospital.

Rodgers is in serious condition and Evans is in fair condition.

A person on the ground, Diana McKeown, was injured and taken to Memorial Hospital. She is in fair condition.

Utilities to the homes damaged in the crash have been completely shut off.

Power has been restored to other homes in the neighborhood, however, five homes near the three homes that were damaged are under mandatory evacuation.

Residents who live on Iowa Street who are not under mandatory evacuations, have been cleared to return to their homes.

Those residents who live in the neighborhood and can provide a photo ID will be escorted to their homes. They are asked to enter checkpoints at the corner of Elwood and Iowa streets or Keller and Iowa streets.