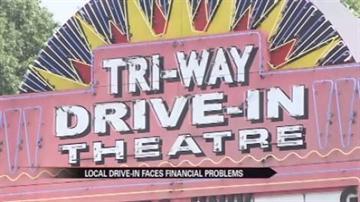 PLYMOUTH, Ind. -- The Pymouth Tr-Way Drive-In is upgrading its projection system to a digital format, but that's proving to be costly. Right now - they're asking for help from the public. The goal is to raise $300,000 before the end of summer, otherwise, they may have to shut down.

For the last 60 years, folks have driven in, rolled down windows and tuned their radio.

For David Kinney, the owner of Tri-Way Drive-In, it's just part of what makes drive-in theaters so special.

"You see it under the stars, and you get to breathe the fresh air, in the countryside; it's just a really nice feeling," said Kinney.

Next year, film companies own't be producing 35 milimeter reels which means Kinney's drive-in must go digital or go out business.

Kinney has until Labor Day, the end of their summer movie showing season, to secure $300,000 for new projectors. Otherwise, their four screens could be sitting blank for awhile, or worse yet, permanently; and that would be a huge loss for the community.

"There are kids that come out and they bring their kids, it's a generational type thing," Kinney said. "To lose that, and to lose the nostalgia that comes with this, would be very devastating."

All is not lost yet though.

He and a few other supporters are in the works of raising the money. They're doing everything they can, selling bumpterstickers, t-shirts and advertising spots along the theater's entrance.

He's hoping the community will show support for the theater, before it's too late.

If you'd like to help the theater out (located at 4400 N. Michigan Rd in Plymouth, IN), head over to their website to find out how.