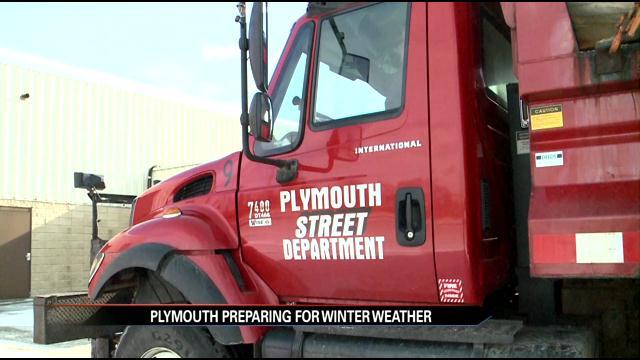 The city of Plymouth is preparing for the first major snow fall of the season. The city was spared the impact of the storm back in November but they don't think they will be as lucky this time around.

Months into the snow season and the Plymouth Streets Department will be starting up their snow trucks for the first time Tuesday morning. The trucks will be out plowing snow as early as 3:00 a.m.

“We have had a pretty mellow year so far, really just a few little salt things. We have not yet plowed this year and this will be the first big one,” says Jim Marquardt, Commissioner of Plymouth Streets and Sanitation Department.

Marquardt has been following the weather forecast and getting his crew ready for four to eight inches of snow.

“Make sure all the trucks are ready, fueled up, oiled, and greased. That way your plows go up and down pretty easy and other than that ya know just wait until it comes,” says Tim Bittinger, Foreman of Plymouth Streets Department.

The street crew also has to worry about how effective their road salt will be.

When the temperature drops below freezing it becomes too cold for salt alone to work.

“We do have some salt mixed with beet juice that helps lower the freezing. If it gets real bad then we start putting some sand with it,” says Marquardt

In addition to preparing working equipment Bittinger says there is also some personal preparation that needs to be done.

“Always dress in layers to stay warm because I plow the industrial park and you never know if you are going to get stuck or whatever and the wind does howl out there so you want to definitely be warm,” says Bittinger.
Share this article: