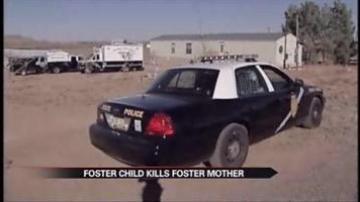 TUCUMCARI, N.M. -- An adopted child is behind bars for allegedly killing the woman who gave him a home.

A 14-year-old foster child in New Mexico is accused of killing his adopted mom.

The truly devastating part is this foster family was known by everyone in the community for being a home they could always rely on.

"They've taken in anywhere from 80 to 100 children into this home. They were a family that we could rely on in the middle of the night," said Enrique Knell, CYFD spokesman.

Police said the teen shot his adopted mother, then stabbed her daughter.

His adopted father and an older brother were able to restrain him.

Police are still struggling to understand what provoked him.