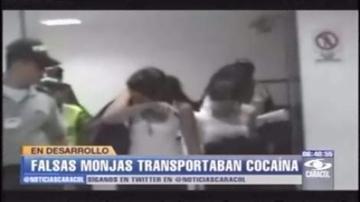 SAN ANDRES, Colombia — Police say they found drug smugglers posing as nuns. The women dressed as nuns were caught with about four and a half pounds of cocaine taped to their bodies.

The women were caught at the airport.

Colombian police say the women thought the disguises would spare them from being searched.

Security personnel thought their outfits were suspicious and that they acted nervously.