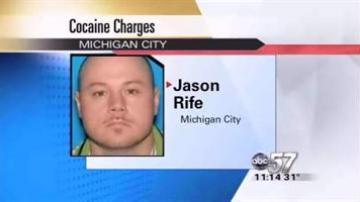 Jason Rife of Michigan City has been charged with two felonies. Police say they caught the 35-year-old speeding on Friday.

Then after an investigation they found seven grams of coke, five pounds of marijuana, steroids and a gun. They also found $5,000.

Rife was already in trouble with the law. He was a part of the La Porte County Community Corrections work release program for domestic violence battery and battery to a child.