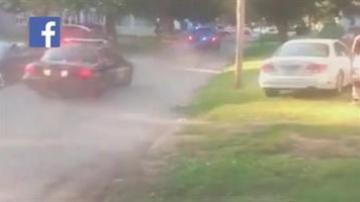 BERRIEN COUNTY, Mich. -- A Benton Harbor resident recorded a police chase that went through his neighborhood three times on the Fourth of July. He says it wasn't appropriate on a day when kids and families would be outside.

Andre Isom says on the 4th of July, he watched as police cars sped past his house on Jennings Avenue not once, but three times.

"Pretty dangerous situation. By the third time everybody was pretty much on the sidewalk out of harm's way but you just never know," said Isom.

Isom says residents were terrified there would be a fourth lap.

"I was trying to figure out like how are they not catching him? He came through here 3 times and nobody thought to block the streets on both ends," said Isom.

The video shows people trying to get out of the way. Some even put their cars on their lawns to get them out of the street.

"A couple cars were hit, you're really putting a lot of lives in danger," said Isom.

Police chased the driver for allegedly having drugs.

Isom has one question for police.

"I'm not a cop. I don't know the protocol for those things but when you're talking about a day like the 4th of July when there's partying enjoying themselves on a beautiful day, you want to take into consideration like is it really worth it? We could lose lives over one guy," said Isom.

The chase was conducted by the Berrien County Sheriff's Department. Sheriff Bailey says as long as the officers have their lights and sirens on and feel it is safe, they can go after suspects until they catch them.

He said in this case, they did the right thing.

The suspect is in custody.