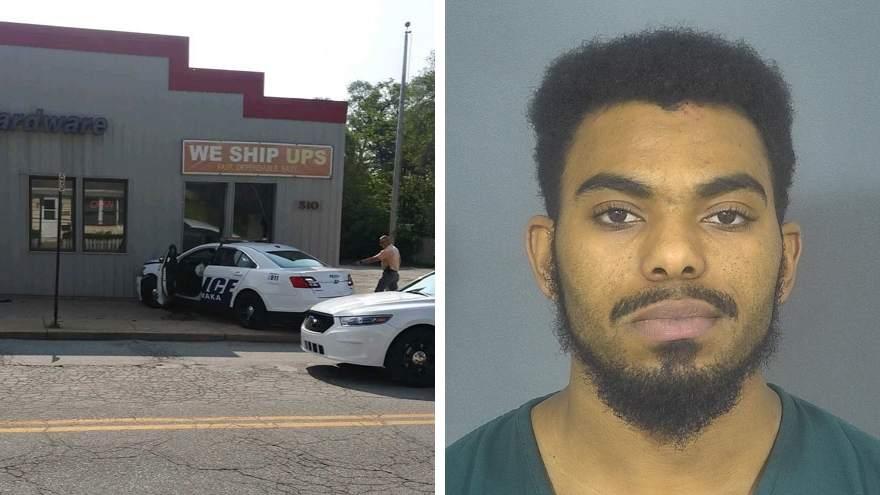 MISHAWAKA, Ind.—Charges were filed Tuesday for a fleeing suspect after a police cruiser struck an Ace Hardware building on Monday morning to avoid hitting city workers while it pursued the suspect, according to the probable cause affidavit.

On June 3 around 10 a.m., an officer with the Mishawaka Police Department attempted to conduct a traffic stop after it observed a green 2007 Chevrolet Cobalt cross a double yellow line near Merrifield Park on Mishawaka Ave., according to court documents. The Chevrolet did not stop and a pursuit ensued, police said.

The Chevrolet entered the Ace Hardware Store parking lot, located at 510 N. Cedar St., and drove onto the sidewalk. The police officer attempted to shield the Mishawaka Street Department employees who were working in the roadway by turning his vehicle in front of the Chevrolet but the Chevrolet pushed the police cruiser into the Ace Hardware building, court documents said.

According to court documents, a city worker had to jump out of the way to avoid being struck by the Chevrolet, which resulted in an injury to his back.

The Chevrolet did not stop and continued northbound on Cedar Street until it apparently lost control near Mishawaka Ave., past Marion St., and struck several parked vans, spinning multiple times before it finally crashed into a parked Ford truck, according to the probable cause affidavit.

The driver of the Chevrolet, Malik Lamar Grayson, 23, was found to have a bag containing a green, leafy substance lying on the passenger side floor board that later tested positive for the presence of marijuana, court documents said. Police observed that Grayson had “slow speech and smelled of the distinct odor of marijuana," reports said.

According to the probable cause affidavit, Grayson failed a field sobriety test.

Grayson is being held in the St. Joseph County Jail without bond on charges including resisting law enforcement and possession of marijuana. He is due in court on June 5.