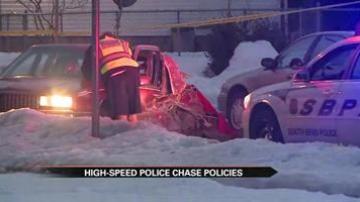 SOUTH BEND, Ind. -- South Bend Police chased a vehicle for several minutes during rush hour Monday afternoon. The chase ended when the suspect hit several vehicles and a pedestrian. Why did police continue chasing the vehicle when speeds got up to 70 mph during the chase?

The chase started when a South Bend Police officer tried to pull over a driver who committed a minor traffic violation.

The driver refused to stop and instead sped away.

The chase ended at Ewing Avenue and High Street when the driver of a red Cadillac hit multiple cars and a pedestrian.

"I thought a plane crashed. That's how loud it was," said Brooks.

Brooks lives at a house on the corner of Ewing Avenue and High Street.

Monday night he looked out the window and saw four parked cars crushed.

He didn't know it at the time, but a five minute long police chase had just ended in his yard.

"There was like 7 or 8 squad cars right here. And there was a guy lying in the middle of the street. His leg was all twisted. Blood was coming from his leg. His bone was sticking out of his leg when they finally cut his pants back," said Brooks.

Police say an innocent pedestrian, 40-year-old Lucky Weah, got caught in the middle of the chase and was hit.

Weah is still at Memorial Hospital, but is listed in good condition.

The driver, whose name won't be released until he's charged, is also at Memorial Hospital. He is under police guard.

"It was originally reported that that pedestrian could have possibly been ejected from our suspect vehicle, but that turned out not to be true. Our pedestrian was just an unwitting person just walking down the street," said Captain Phil Trent of the South Bend Police Department.

At times, the police chase reached speeds of 70 miles per hour.

Why didn't the officer call off the chase and find the driver later?

"The problem in this case is -- had the plate come back to that vehicle-- with a legitimate name-- the officer would have said 'Well okay, yeah sure I can find this guy we'll let everything cool down and we'll go to this house to the registered owners' residence, we'll knock on the door and get to the bottom of it that way,'" said Trent.

Trent says the officer made a quick judgment call to chase because the car had fake plates.

Police say the driver is facing multiple charges, but he has not been charged yet. His identity will be released when he is officially charged.