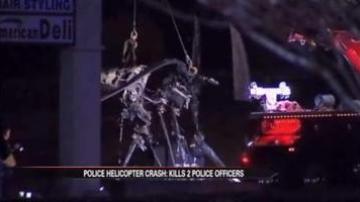 ATLANTA -- A police helicopter crash in Georgia has claimed the lives of two officers.

The crashed happened just after 10:30 p.m.on Saturday in Atlanta.

Police were looking for a nine-year-old boy when the crash occurred.

Witnesses say the helicopter fell and hit power lines on the way down.

No one else on the ground was injured.

Federal investigators are on the scene of the crash trying determine what happened.