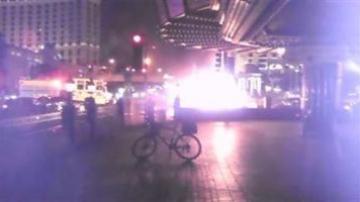 LAS VEGAS —  Police in Las Vegas continued their for search for a black SUV involved in a deadly shooting on the Las Vegas strip.

According to police, suspects in a black Range Rover opened fire on a Maserati, hitting the driver.

The driver then crashed into a taxi, causing both cars to burst into flames. The driver of the Maserati and the taxi's driver and passenger were killed.

When police arrived, the Range Rover had already fled the scene.

"We believe the occupants of the Range Rover are armed and dangerous and should you encounter this vehicle you should not take action," said Sheriff Doug Gillespie. "Instead, call your local police department and alert them to the whereabouts of this suspect vehicle."

Investigators said they are reviewing surveillance video from businesses near the scene.