POLICE: " In some cases, winter weather works in our favor" 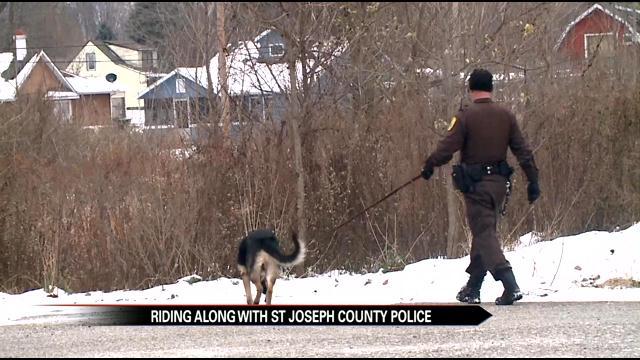 You would think it would work against police and other emergency responders. But in some cases it has the opposite effect.

She is working an attempted burglary in South Bend.

An elderly woman, Lona Tobey, called 9-1-1, frantic after she said a man in dark clothing smashed a window at her home.

“The burglar will knock on the door. At first, very normal. And then they'll pound on the door. And a lot of times if someone will answer the door they'll say oh my cars down the street and it's out of gas,” Wallick said.

But Tobey didn't answer the door.

So the suspect threw a heavy object through her bathroom window.

“I just don't know what to think. I had never been through anything like this before. I was just real shook up,” said Tobey.

So Corporal Wallick and other St. Joseph County Police searched the area, using K-9s to track down his scent.

Surprisingly, St. Joseph County Police say freezing temperatures and snow works in their favor when it comes to tracking down criminals.

“If we're checking a neighborhood and it's say twelve degrees below zero with a wind chill and say its really cold like today its not normal for people to walking around or doing their jogging just because of the weather,” Wallick explained.

At one point, we thought we found the suspect, a male in dark clothes matching the description Tobey gave.

But he wasn't our guy.

Anyone with information about this attempted burglary should call St. Joseph County Police.