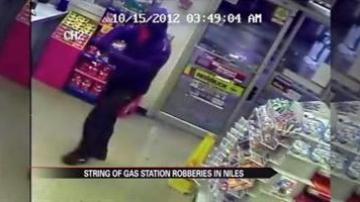 Niles detectives sifted through surveillance video to get images of the male suspects.

Employees told police the suspect was armed with a gun.

Three have happened within the last three nights.

"I thought maybe one day there might be a robbery there but I didn't think it would happen three times in three days. I don't know what to think about it,” said Brian Flick.

Flick doesn't live far from the hardest hit gas station. He said he feels safe, but doesn’t feel like those who work at the station are always safe.

"I just feel sorry for the people that are working in an overnight gas station. I worry about them,” said Flick.

At this time police don't think it's so much that these are the same gas stations, but that they are both in remote areas. Both stations are near neighborhoods and just a few other businesses.

Police say all of the robberies have happened between 8 p.m. and 4 a.m.

If you have any information about these robberies, contact the Niles Police.