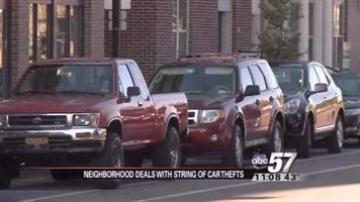 The neighborhood is now surprised by the brazen thefts so close to the busy shops and restaurants. Many people say they consider the newly-developed plaza to be safe and relatively crime free because of the strong police presence.

"A car pulled out of the parking spot and I thought that's it - rock star parking," said restaurant goer Darin Hurn.

Hurn is just one of several people to bypass the parking garage for the coveted front row parking spots right in front of popular restaurants like Brother's Bar and Grill.

However, like many people, Hurn had no idea the parking spots along Napoleon Street, to the East of Eddy Street Commons, are now being targeted by thieves.

"I'm very surprised, I even left my sunglasses on the dash of my car. I just wasn't expecting anything like that to happen in this area," said Hurn.

Police say that in just the last week roughly 20 cars have been broken into along side streets near Eddy Street Commons.

Now, Hurn and others that frequent the area say they no longer feel safe parking along the street. "Oh yeah, I am going to consider taking my car and parking in the garage across the road," said Hurn.