Police officer injured in accident on the US20 bypass 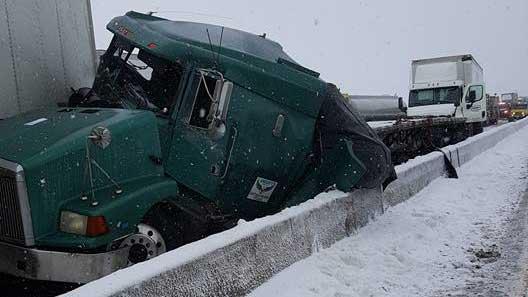 The eastbound lanes of the US 20 bypass was shut down for just over an hour Tuesday after multiple accidents were reported, including one involving a police cruiser.

A South Bend Police officer was taken to the hospital after another vehicle slid into the rear of his patrol car.

Two other people were also injured in the accident.

The city of South Bend says the officer was shaken up, but not seriously injured. He was released from the hospital.

The St. Joseph County Police Department also responded to accidents on the bypass.

"Sometimes we get asked the question why does it take so many police cars, fire trucks to work an incident up there. This is one of the reasons," said Assistant Chief Bill Thompson of the St. Joseph County Police Department.

Thompson says it is important for drivers to pay attention, drive slowly in poor conditions and to move into the other lane if there is an accident ahead or emergency vehicles stopped ahead.

"We want folks to do is when they see those lights at a distance start slowing down. Start making your lane motions to where you're in the right lane, the proper lane to get around it," said Thompson.

Conditions on the bypass were poor all day due to the snowfall.